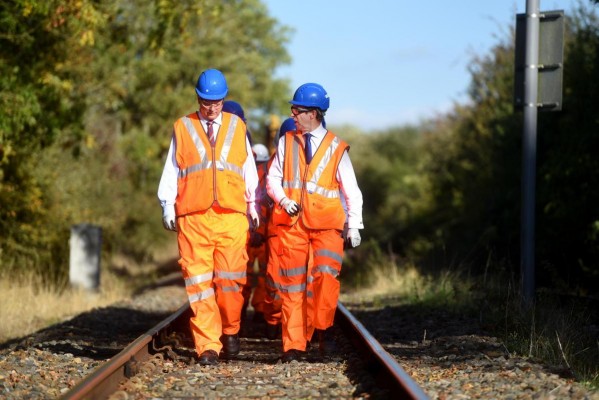 Transport Secretary Chris Grayling welcomed the milestone moment for East West Rail during a visit to a site in Bicester.

Grayling said that East West Rail will “transform the journeys in one of Europe’s most vibrant economic regions,” providing passengers and businesses with a transport system that unlocks economic opportunity and drives forward new housing and jobs.

He added: “As a hub for technical and scientific innovation, home to world-class universities and a skilled workforce that drives growth, the success of England’s economic heartland is imperative to the UK’s prosperity and productivity.

“Rapid progress on the project means we will see construction underway on direct, fast and reliable services from next year, delivering significantly better connections for passengers.”

“East West Railway Company is working hard with Network Rail to open this line as soon as possible. We’re delighted to have the work underway. When open this line will boost economic growth, and make it easier and quicker for people who live here to travel in the local area.”

Western Section Phase 1 (between Oxford and Bicester) has already been completed, with major construction activities on Phase 2 planned to start in late-2019 following these enabling works and final government approval.

In time, the Western Section of the route will join with the Central Section, allowing trains to run directly between Oxford and Cambridge.

Return to the latest news